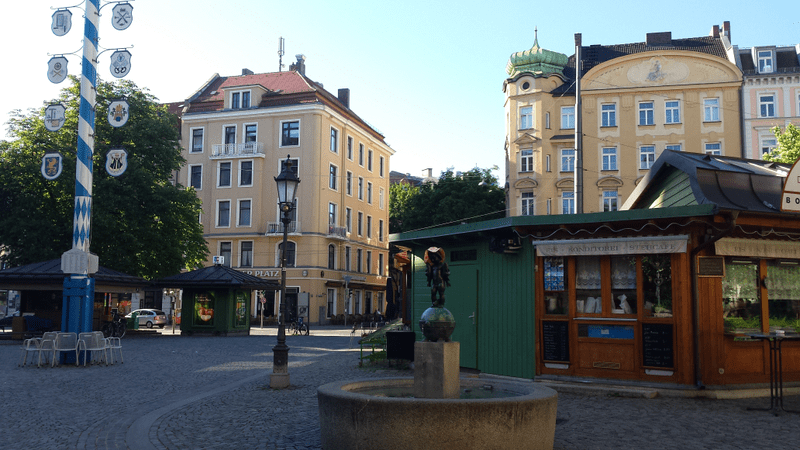 The first mention of Munich in an official document appeared in 1158. Haidhausen, however, appeared earlier, in 808 as haidhusir, “houses in the moor.” At that time it was a very small village. In the 14th century, Munich earned the right to the salt trade, and all commerce went over a bridge between Haidhausen and Munich. While Munich profited handsomely from the trade, Haidhausen only benefited marginally. Many craftsmen and peasants looking for new opportunities came to Haidhausen. They were not allowed to settle in Munich, as Munich was only for wealthy settlers. The peasants and craftsmen were too poor to get the right to live in the city.

Haidhausen later became a central marketplace for beef, drawing chefs from Munich to stock their kitchens. Haidhausen boasted a lot of loam as well, and with the help of cheap labor brick production became another important trade, supplying building materials for many construction sites around Munich. Many seasonal workers from what we now call Italy worked in Haidhausen under difficult circumstances. Those with leprosy and other infectious diseases were obliged to seek treatment beyond the city walls. As such, Haidhausen rose to prominency as an important medical treatment center. Haidhausen’s strategic location also made it highly contested in times of war. Often, homes were plundered.

During the Thirty Years’ War, Maximilian I of Bavaria created the Catholic League against the Protestants. In 1632 the Protestant Swedes used Haidhausen as their base to attack Munich. The town’s residents housed and fed them as they positioned their artillery at the Gasteig hill. Almost immediately, after the municipal authorities of Munich paid a ransom and let in the Swedes, they left Haidhausen. But the Swedes came a second time, and failing to get through Munich’s reinforced walls, they plundered Haidhausen. After the Thirty Years’ War, the noble Preysing family bought a large tract of land in Haidhausen. There they built a castle modeled after the French castle of Versailles. The castle was demolished in the 19th century, and today nothing remains.

There was one event, on September 13, 1813, that left its mark on the collective consciousness of the people of Haidhausen. On this day, a storm ravaged the region. The Isar River, flowing between Haidhausen and Munich, swelled to historic levels. Residents came to watch the natural spectacle, and the bridge they were on collapsed under their weight. More than 100 people drowned. Ten years later, the Ludwig Bridge, named after King Ludwig I, was built in its place.

In 1834, a hospital opened in an old coffeehouse in Haidhausen that later would be called Rechts der Isar. Workers and craftsmen paid a fixed amount in order to finance the hospital. This was the predecessor of today’s German medical insurance.

Haidhausen became an official part of the city of Munich in 1854. In the second half of the 19th century, it transitioned from village to modern urban neighborhood. Much of this growth stemmed from reparations paid by France following the Franco-Prussian War of 1870-1871. The district was connected to Munich inner city via tram, and the train station Ostbahnhof linked Haidhausen to the German rail. Industrialization boomed, with small industrial companies settling along the Ostbahnhof railroad line. One company that benefited from the new opportunities in Haidhausen was Franz Kathreiners Nachfolgers, a colonial trading company founded in 1876. They bought a tract of land in Haidhausen near the Ostbahnhof, and from thererr traded in sugar, cocoa, coffee, and tea. The tea, with the brand name “Marco Polo tea,” was imported from China. The company cleverly marketed cheap malt coffee as healthy “Kathreiners Kneip-Malz-Kaffee.” By 1900, 338 employees worked at the Haidhausen location. In 1971 they moved from Haidhausen to Poing near Munich and went bankrupt in 1997.

Haidhausen not only was a place for colonial trading, but also for beer brewing. But preindustrial beer production faced a huge obstacle: It lacked a cool storage facility necessary for preservation, especially during the hot summer. The brewers eyed the area around the Gasteig hill in Haidhausen as a suitable site for a network of underground cellars that would keep the beer cool. In addition, chestnut trees were planted to provide shade in the summer. By 1850 more than 50 beer cellars had been dug around the Gasteig hill. The beer cellars were allowed to sell bread and beer, but not whole meals. That was reserved for the innkeepers. Therefore, customers brought their own meals and only ordered beer. This tradition lives on today in the form of the beer garden. You can bring your own meals in every beer garden in Munich. The Linde Group invented a cooling system in 1873, thereby revolutionizing beer storage. Many smaller brewers, though, were not able to afford the system and went bankrupt.

With all this growth came a rising population. A new living quarter for the newcomers was established, called the Franzosenviertel (French quarter). The streets were named after French sites relating to the Franco-Prussian War of 1870-1871; the main axis was called Wörthstrasse. Banker Carl von Eichthal had insider knowledge on the coming construction of the Munich East station (Ostbahnhof) and bought tracts of land nearby. Huge apartments were built from 1872 onward, and many today have historic protection. More and more rural people moved to Haidhausen. Land prices increased dramatically. Houses were divided into very small apartments (172 sq ft), with unsanitary conditions for most residents. By 1900, Haidhausen had become the most densely populated part of Munich.

During the summer of 1914, war euphoria swept Germany, including Haidhausen. On August 10, 1914, in front of the Johanniskirche church (St. Johann Baptist), a blessing of the troops going to war took place. A huge crowd of patriots cheered them to victory. During the war, victory took longer than expected, and many inhabitants endured food rationing. The winter of 1916-1917 especially was hard for the people in Haidhausen. Many died of flu or malnourishment.

On January 5, 1919, Anton Drexler founded the DAP (German Labour Party). Later that year, Adolf Hitler became a member and gave his first patriotic speech in the Hofbräukeller at the Wiener Platz. In 1923 Germany’s economy plummeted as it faced enormous reparation payments for its loss in World War I. Hyperinflation swept the nation; one glass of beer cost 72 billion marks. The time was ripe for a coup, and Hitler gave it a try on November 8, 1923, in the Bürgerbräu, also at that time located in Haidhausen. The coup failed, and Hitler was incarcerated in a town near Munich, Landsberg am Lech. Finally, in 1933 Hitler gained power in Germany (Machtergreifung) and established the Third Reich. One newspaper that gained prominence in the Third Reich, the originally social-democrat and liberal Völkischer Beobachter, had its roots in Haidhausen. Established by Johann Naderer in 1887 under the name of Münchner Beobachter, it was bought and sold by several people until a right-wing group acquired it in 1918. Subsequently, it was published throughout the country under the name Völkischer Beobachter. In 1921 Adolf Hitler became the sole proprietor of the paper, and he made it his main propaganda publication.

After World War II, Haidhausen lay in ruins. Allied bombers destroyed much of Munich, along with parts of Haidhausen. On April 30, the U.S. occupation force arrived in Munich. They allowed free elections, and the first mayor of Munich became Karl Scharnagl of the CSU. The rebuilding effort included many women, since a large number of men were killed in combat or were in captivity. The people of Haidhausen and the U.S. soldiers longed for diversion after the tough war years. The Hofbräukeller and the Bürgerbräukeller became entertainment centers. In 1948 there was the currency reform: The old Reichsmark was exchanged for the new Deutsche Mark. Suddenly, all shops were fully stocked again. This economic surge lay the foundation for the postwar economic miracle. The 1950s and 1960s saw high economic growth rates.

But in the 1960s, Haidhausen still was an area of petty crime, with many poor people living in the area at that time. Immigrants from Turkey, Greece, and Italy moved to Haidhausen’s cheap apartments in the 1970s. Then, students became interested in Haidhausen. New cafés and restaurants appeared at a rapid pace. Haidhausen morphed into the new quarter for artists. An additional cultural hot spot opened in 1984: the Gasteig cultural center, with a big library and, in 1985, the Philharmony for classical concerts. Next to the Gasteig, the old Bürgerbräukeller was demolished, and the GEMA (Society for Musical Performing and Mechanic Reproduction Rights), which represents artists rights, opened its offices. All these changes led to rapid gentrification. In the 1990s, many former student cafés and restaurants did not survive.

Nowadays, Haidhausen is a lively quarter with great cultural attractions.